Learn the fundamentals of 2D graphics

Before we start making some graphics, let’s cover the basics.

First, it’s important to know that visible objects drawn in the window follow a coordinate system. Instead of something you might be familiar with from your math classes, this system has its origin, or (0, 0), in the upper-left corner, and the x and y values get larger toward the bottom-right. This might seem odd, but it’s actually common in 2D computer graphics. 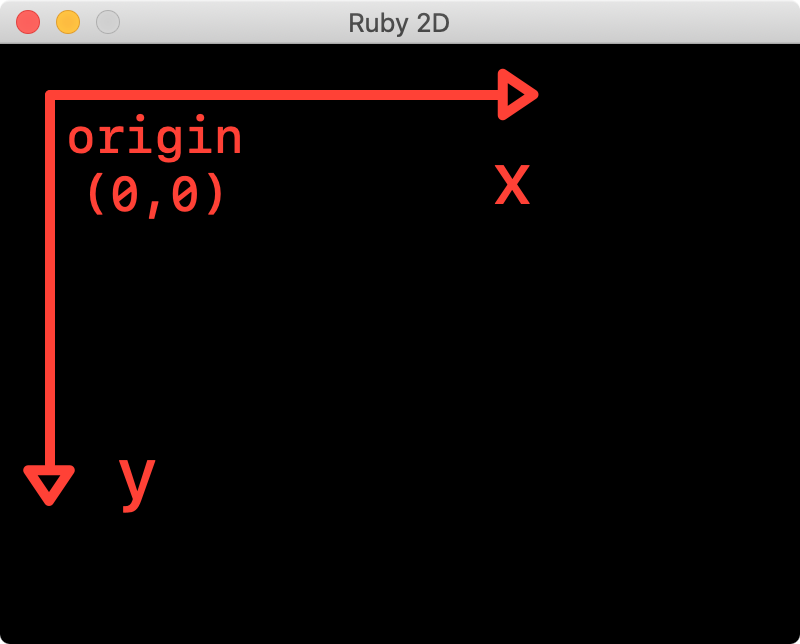 In this documentation, x is the x-coordinate and y is the y-coordinate. When an object has multiple pairs of x and y coordinates, they will be numbered, for example: x1, y1 or x2, y2.

All objects that can be drawn in the window are added automatically. When you called Triangle.new in the “get started” tutorial, its add method was called for you, which added the triangle to the window. If you want to remove an object from the window, simply call remove. Here’s an example showing how to remove, then add a shape back to the window:

All objects can be removed from the window by simply calling clear:

Objects are drawn in the order they are created. For example, if you call Triangle.new and then Square.new, the triangle will be behind the square. You can override this behavior by setting a “z-index” for the object. An object with a higher index will be “above” (in front) of another with a lower value. All objects start with a z-index of 0.

For example, to make the following triangle appear above the square, we can set it’s z-index like so:

You can check if a point is within the bounds of an object by calling its contains? method like so:

Example of moving a square shape with keys

Continue to the next topic ▸

✏️ Suggest an edit to this page